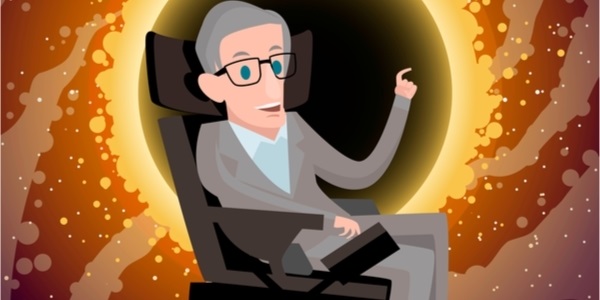 Crushing the Odds and Being Your Best

As we face unusual challenges this year, I thought it would be good to focus on someone who achieved his goals despite facing enormous odds.

For most people, Stephen Hawking is the only living physicist they can name. He is well-known as the scientist in the wheelchair with the iconic, computerized voice. He is the man who wrote A Brief History of Time, a bestseller that introduced millions to concepts like spacetime, black holes, and quantum mechanics.

But Stephen Hawking wasn’t born in a wheelchair, nor was he always a world-renowned mind. To become the latter, he had to learn to live with the former, and it’s that aspect of his life—his own personal journey—that I find particularly inspiring.

Hawking was born in 1942. Like Albert Einstein, the man to whom he is so often compared, he initially struggled in school. Learning to read was particularly difficult. But as he grew older, Hawking became increasingly fascinated with science. When he was sixteen, he even built a computer out of a telephone switchboard and pieces of a clock. Eventually, he decided to focus on mathematics, because for him, solving math problems was as natural as breathing. Said one of his teachers:

“It was only necessary for him to know that something could be done, and he
could do it without looking to see how other people did it.”

While Hawking spent most his time in a world of numbers, he also enjoyed being outside. He particularly enjoyed rowing in college. Despite being viewed as a brash and somewhat lazy student Hawking graduated with a first-class (or “Honors”) degree in natural science at Oxford.
For Hawking, the future seemed bright. But there was a shadow falling over that future.

The symptoms started during his final year at Oxford. It began with a sudden fall down a flight of stairs. Then, rowing became increasingly difficult. What at first seemed like a simple case of clumsiness quickly worsened, until even his speech was affected. During a trip home for Christmas, his family noticed the changes and immediately sought the opinions of several doctors.

The diagnosis was one of the worst imaginable: Amyotrophic lateral sclerosis. ALS. Lou Gehrig’s Disease. With ALS, the neurons that control voluntary muscles die out. Symptoms start with fatigue and muscle weakness before progressing to the point that even simple things like speaking, swallowing, and breathing become impossible. Most people die about two years after diagnosis, as Hawking was expected to. There is no cure. When Hawking was diagnosed, he was only 21 years old.

It would have been so easy to give up, to admit defeat, to rage against his condition. And indeed, Hawking initially fell into depression, thinking there was no point to continuing his studies. Within a few years, he lost the ability to walk. The ability to write soon followed. Eventually, he even lost the ability to speak. But he did not die, and he did not give up. Because during that time, Hawking made possibly his most important discovery.

“Intelligence is the ability to adapt to change.”

“My goal is simple. It is a complete understanding of the universe, why it is as
it is and why it exists at all.”

I believe that if we follow his example and adapt to all the sudden and difficult changes life has in store for us, then we, too, can become what we want to become. We, too, can overcome the odds.

After all, life can rob us of many things. But it can never rob us of our goal.